As we just passed the Halloween season, many of us on our campuses sought to raise consciousness around issues of cultural appropriation that tend to arise more frequently around this time of year. Campaigns such as Ohio University’s “We’re a Culture Not a Costume,” in 2013 have popped up at our institutions of higher education, as a means to educate students of the effects of their actions in dressing up and mocking other cultures. For us as Native peoples, we have to endure once again, another white woman dressing up as Pocahantas (aka “Pocahottie”), which is not only completely inaccurate and despicable, but it continues to sexualize Indigenous women. Though often unintentional acts, that does not excuse their actions, nor does it safeguard the perpetrator from criticism for the constant trauma unleashed on the groups they are appropriating. This is a teachable moment that we cannot let pass us by – and people of color cannot be the only ones standing up to such injustices. I often think of and live by Desmond Tutu’s famous quote: “If you are neutral in situations of injustice, you have chosen the side of the oppressor.” We need to question why our students think that these more animated depictions of people of color and their cultures are accurate and/or okay to depict in such a demoralizing manner. This often stems from what our students are being taught and the messages they see from an early age, that continue to be perpetuated repeatedly throughout time.

As student affairs practitioners, centering our work and efforts on issues of social justice and equity should be a central thread through all of our educational events and programming we put out there. We know that college is a prime time for students to develop and learn to dialogue about their multi-layered and intersecting identities. It is important to constantly question and think critically around American traditions and histories. Who is it that wrote and passed down this history? Do they identify with the dominant/privileged group? Have we listened to perspectives from those who have been and continue to be marginalized in our society?

Thanks to encouragement from my parents and other mentors, I began asking some of these critical questions about American history early on. However, I remember that back in my elementary school days, we discussed Columbus like he was a hero of sorts, and that our American government had created a holiday just to celebrate him – a man who destroyed Indigenous lands and people for monetary and proprietary gain. As many of us know, many cities, states, and colleges and universities have been rethinking “Columbus Day,” and thus renaming it Indigenous People’s Day, as it should be. However, this is more than just a simple proclamation for us, as Indigenous peoples. It is a reclamation and recognition of our livelihood, and another way of healing from the insidious trauma our ancestors suffered, and the effects of the historical trauma our people continue to suffer today.

Just like the story of Columbus has been twisted by a colonizer’s perspective, so too, has the story of the origins of Thanksgiving in this country. I would argue that most non-Native kids in America have no idea of the true meaning behind Thanksgiving, as they are often taught a very fairytale-like version in school, or they know only what they see being sold in stores and in advertisements (i.e. turkeys, pumpkins, pies, pilgrims, Native Americans, gourds, etc.) and Charlie Brown cartoons. They are taught that Native Americans and Europeans feasted together happily after the first harvest. While it is true that the Wampanoag people and the pilgrims shared in a harvest celebration in 1621 after allied efforts, much changed 50 years later as the Wampanoag would no longer be a free people. Consequently, for many Indigenous people, Thanksgiving is a brutal reminder of colonization’s destructive effects on our communities.

This is when it is our job as student affairs practitioners, educators, parents, aunties or uncles, or the like, to educate our young people on the importance of questioning and understanding the true histories of how our country was founded – on the basis of white and Christian supremacy. Through conquest and colonization, the Europeans destroyed and claimed Indigenous lands and people, as well as enslaving African Americans. This romanticized version of European-Americans conquering and founding the Americas is simply one perspective of the truth.

What the Thanksgiving holiday has done is nearly erase the true recollection of the actual tumultuous relationship between the Wampanoag and the English 50 years after this three-day harvest.  While Massosoit, the paramount chief of the Wampanoag, became a critical ally for the English settlers in the years following the establishment of Plymouth, a generation later the English would bring disease and death to the Wampanoag in their efforts to acquire more land and power. A war was ultimately sparked as a result that decimated half of the Wampanoag people. This war was one of a series of brutal battles dimly remembered between Native Americans and the colonists that occurred in what is now the Northeastern United States.

Consequently, I want to offer you practical tips to honor Indigenous peoples as we near this time of Thanksgiving during Native American Heritage Month:

1)    Listen to Indigenous people on our perspectives on American history. You may be surprised that we do want to share our stories and demystify inaccuracies.

2)    Educate yourself and others on how diverse Indigenous peoples are. While we have some similarities like being a communal culture and having an attachment to place, we also have many different cultural practices and traditions amongst our 573 federally recognized tribes and several state-recognized tribes. Also, Indigenous people have various levels of traditional knowledge depending on our upbringing and where we grew up (i.e. on a reservation, urban or rural area; traditionally involved in ceremonies and cultural practices or not). Also, many identify as multi-race and may physically look more African American or White-passing.

3)    Seek out resources and activities to challenge your students or your own children to think through historical perspectives on the origins of Thanksgiving and other historical moments. Push them to develop an understanding of official knowledge as politically constructed and contestable.

4)    Recognize and honor Indigenous tribes and lands as a part of your everyday practice, and particularly at public assemblies. Do your research on honoring the tribes whose land you are on, and invite an elder or leader from that tribe(s).

5)    Appreciate our culture, do not appropriate. Do not have your kids/students make their own construction paper feather headdresses as they perpetuate stereotypes and disrespect. Instead, support Native artists and businesses by purchasing authentic, non-sacred items all times of the year.

6)    Support your local tribes and organizations advocating for Native American communities through volunteering, creating awareness, or other efforts.

While this is not an exhaustive list, I hope it gives you some initial tips on how to create some social change and dialogue to critically examine the foundations and historical perspectives of American holidays, such as Thanksgiving. As you prepare and eat your turkey and pies this Thanksgiving during Native American Heritage Month, I challenge you to rethink and recognize our country’s history of racism, greed, and genocide that was prevalent as a part of the foundation of America. Seek to educate yourselves and inform others, particularly our youth.

I know I choose to honor the Wampanoag people and celebrate the survival and resilience of Indigenous peoples this Thanksgiving. #wearestillhere

What will you do to change the narrative?

Wado for reading! Please note that my opinions are my own and are not representative of all Indigenous peoples.

Tiffany Smith (she/her/hers) is a cisgender, Cherokee Student Affairs professional who is currently pursuing her Ph.D. in Student Affairs Administration at the University of Oklahoma (plans to graduate in May 2019), with her research centering around utilizing Indigenous epistemologies and methodologies to explore Indigenous student experiences in undergraduate engineering programs at non-Native institutions (PWIs). After 13 years of experience in career development, student engagement, and diversity and inclusion efforts, Tiffany recently transitioned (in July 2018) to the Director of Career Services at Oklahoma City University. Tiffany enjoys being involved in her community, spending time outdoors and/or on the lake, traveling, presenting and meeting new people at conferences, and spending time with her husband, Zach, and 3-year-old son, Tytan. You can find her on Twitter @FutureDocSmith. 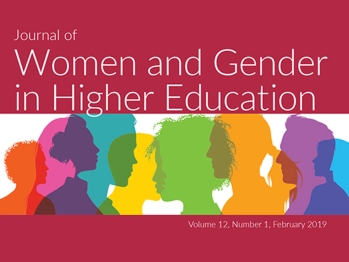 Call for Applications: Journal of Women and Gender Editorial Board (2021-2024 Term)