As soon as we connected in late 2015 to discuss collaborating on ethnographic research about sex, socializing, and sexual assault among undergraduates, we knew that both of us wanted to write a book for the broader public because students’ sexual behaviors take place in a larger societal context. What we didn’t know then, but what became clear as soon as we began collecting data, was that our book wouldn’t just be about sex, socializing, and sexual assault: it would also, inevitably, be about race.

These histories are well known in the Black community, but under-taught nationally. We teach young people about Rosa Parks’ critical role in the Montgomery Bus Boycott, but somehow skip her job as the NAACP’s chief rape investigator. Parks was involved in the defense of the Scottsboro Boys, nine African-American young men accused of raping two white women on an Alabama train in 1931. They served more than 100 years in jail collectively, but the legal consequences of that case included two important Supreme Court cases about jury diversity. And when Recy Taylor, a Black sharecropper in Alabama, refused to be silent about being raped by six white boys in 1944, it was Rosa Parks who listened and supported her in the aftermath. There’s a long and vitally important history to the current-day argument that sexual assault prevention, research, and policy needs to be grounded in an intersectional understanding of power.

Our book, Sexual Citizens, is inspired by and hopes to build upon this history. The book emerges from research conducted as a part of the broader Sexual Health Initiative to Foster Transformation (SHIFT) programat Columbia University. We argue that understanding the social roots of campus sexual assault requires engaging with questions about diversity, equality, and inclusion. There’s the whiteness of the campus drinking culture – but an intersectional perspective means realizing it’s not just whiteness. We need to consider how whiteness is grounded in economic privilege, masculinity, and the history of residential higher education as a place where wealthy men can safely toggle back and forth between living the life of the mind and being the life of the party.

There’s the fact that inequalities, both of race and many other dimensions, are literally structured into campus life through the allocation of space. A wide variety of policies create a situation in which upper-class students, wealthy students, and men control better party spaces, in ways that reproduce and amplify their social power.

There’s the fact that every single Black woman that we spoke with in our ethnographic research recounted experiencing unwanted sexual touching. That’s right, every single one. Sure, there’s a component of it that’s about sexual respect, but you can’t understand those experiences without engaging with the fact that some people feel entitled to touch other people’s bodies without asking.

There’s the frequently unmarked racial focus of many campus prevention efforts. Unquestionably, heavy drinking is related to campus sexual assault – both to experience it and, as we argue in the book and as others have shown, to committing it. But not all assaults are related to heavy drinking; one analysis of survey data from the larger SHIFT study found that nearly half of assaults were not. And because Black students drink less, the assaults that they experience are more likely to be not related to intoxication. Campus strategies that focus heavily on preventing drunken assaults or that leave out attention to assaults in intimate partner contexts, take white women’s experiences to be universal and underserve Black women.

In Sexual Citizens: A Landmark Study of Sex, Power, and Assault on Campus we share stories that seek to capture the widest range of diversity and of experiences. We approach sexual violence not as a problem of individual pathology, but as a part of the social organization of society. We show how many different forms of inequality intertwine to produce situations in which students act sexually in ways that hurt each other. The book pulls back the curtain on what it is like to be a student in residential higher education, and examines, with empathy and compassion, the struggles that students face and the ways that they support each other and hurt each other.

On May 27, we’ll be sharing insights from the book, and chatting with Monica Nixon about our research – not just what we learned about campus sexual assault and the future of prevention, but also about how we may rethink and change our systems entirely to create campuses that are organized to meet the needs of all students.

Jennifer S. Hirsch and Shamus Khan are professors at Columbia University, and co-authors of Sexual Citizens: A Landmark Study of Sex, Power, and Assault on Campus, published by WW Norton. Hear more about their work, and the interactions between sexual assault prevention and work on equity, inclusion, and diversity, at their special NASPA webinar on May 27. 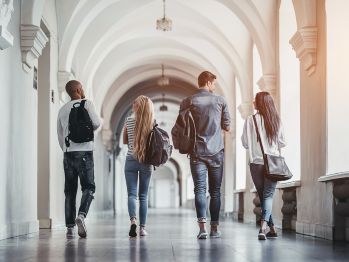 Culture of Respect as an Evolution