The United States Is Changing – Do We Believe It Is Still Possible?

Most Americans report being proud that the nation is becoming more religiously diverse, and nearly three quarters have built a relationship with someone from another tradition (PRRI/IFYC, 2022). More than three quarters of Americans believe that the differences between us are not too big to enable us to work together (More in Common, 2020). This apparent peace with shifting religious demographics in aggregate and belief in the American project is tempered by the finding that 64% of Americans believe U.S. democracy is at risk of failing (NPR, 2022), the causes of which have national and local effects (Michigan Live, 2022). While polls never tell the whole story, attitudes are an important part of measuring civic cohesion. Distrust in one another, distrust in the systems that undergird society, and distrust in our ability to tackle daily struggles (like addressing the education gap exacerbated by the pandemic) and existential crises (like climate change) force those of us working in civic health to draw on different disciplines and sectors to address this challenge.

Civic religious pluralism is not a given; that religiously diverse people and communities would live together and build a shared society is a daily achievement. At Interfaith America (formerly Interfaith Youth Core), this term relies on a three-part definition: respect for religious and nonreligious identities, mutually inspiring relationships, and common action for the common good. With the help of three contemporary thinkers, this piece explores the meaning of mutually inspiring relationships (Hartman-Pickerill, 2020)  within broader society, to interrogate what mutuality and relationships mean amidst inequality and complex, diverse landscapes. Rev. Jen Bailey is founder and executive director of the Faith Matters Network and is ordained in the African Methodist Episcopal Church. Amanda Ripley is a bestselling author and journalist. Rutger Bregman is an historian and author living in Holland. All three are award winning in their endeavors.

The Foundational Question – Who Are We Humans at Heart?

Bregman’s bestseller, Humankind: A Hopeful History” is a multi-angled exploration of human social evolution and why, despite consistent evidence to the contrary, the idea that humans are at our heart selfish and brutish, continues to persist. Through stories that counter common lore, discussion of wide-ranging research, debunking bad research, and sharing models that start from a place of trusting and equipping humans, Bregman convincingly places an assuring hand on the readers shoulder to say, it’s okay to be hopeful about humanity—it’s neither naïve nor ignorant, but holds an important grain of truth. Stories like Lord of the Flies, faulty research like the debunked Stanford Prison Experiment, and misleading findings like the Milgram shock experiment live on in the classroom and inform our shared consciousness about humanity. As Bergman points out early in his book, an increase in news consumption is correlated to an increase in skepticism about the world, and, unfortunately, skepticism is often perceived as intelligence. But as the great Rabbi Abraham Joshua Heschel said, words create worlds, and our perceptions continue to shape our behavior and the behavior of others around us, often in destructive cycles; Bregman points out that this nocebo effect can elicit negative behaviors and experiences based on expectations.

Rebecca Solnit writes beautifully of human generosity after natural disasters, crises, and tragedy—not as the exception but the very essence of who we are as a species (On Being, 2016). It is, for instance, the millions of dollars pouring out in aid to Ukraine and Ukrainian refugees (which is not to ignore the unequal treatment of refugees in different contexts and from different countries), or the mutual aid societies that emerged during the pandemic. What of the unbearable cruelty humans inflict on one another? War didn’t develop for “homo puppy,” as he calls humans (because humans, like puppies, have evolved with characteristics that enable us to build trust, cooperate, and play instead of characteristics purely for hunting, defense and killing), until we shifted from a hunter-gatherer society to agrarian societies, requiring the sustenance and protection of land and the evolution of private property and wealth. Yet this is the world we have. While Bregman shares several compelling models for alternate education, prison, and economic systems around the world, suffice it to say that there is need for more communities to take up the challenge. How do you build institutions and societies that center the belief that people are capable of knowing themselves and what is good for them; desire to both contribute and be cared for; and value the foundational moral principles that scholar Jonathan Haidt writes about (harm/care, fairness/reciprocity, ingroup/loyalty, authority/respect, purity/sanctity) (Haidt, 2008)?

The Next Question: Where Do We Go From Here?

Amanda Ripley’s book, High Conflict (2021) addresses a world in which our families, communities, and institutions are shaped by patterns of discourse, thinking, and behavior that undercut Bregman’s invitation to a more generative and generous structure for living. Ripley’s book is a compelling exploration of how people and communities shift from healthy conflict, which enables us to strengthen our thinking and work, to high conflict, in which winning (or humiliating the other) becomes more important than the instigating issue. Drawing on behavioral psychology, interviews with Colombian rebel fighters, Chicago former gang members, and several diverse US community examples, Ripley interrogates how high conflict evolves, how to avoid it and, crucially, how to transition out of it.

No one wants to feel like a fool. Of the many memorable turns of phrase in the book, the one that struck a particular note of insight in our current discord is this: Ripley calls humiliation the atomic bomb of conflict. Among the most common reactions to humiliation is to dig in further or react and attack without regard for those around you. Early on in its growth as an organization, Interfaith America worked closely with government departments seeking to counter terrorism. We often referenced the general storyline of extremist recruiters—our community was once great, is to blame for our downfall, we can be great again, and you can help us win. Public and private humiliation, whether American cancel and drag culture, degrading stories about whole communities, or the microaggressions and discrimination of what Shonda Rhimes calls being a “first, only, different” in industries and institutions, humiliation is a dangerously pervasive fire-starter in a culture with kindling to spare (Rhimes, 2015).

A Parallel Question: And How Will We Get There?

Jennifer Bailey’s book, To My Beloveds: Letters on Faith, Race, Loss and Radical Hope is a beautiful and moving series of letters to those grieving, to those working to repair the breaches caused by individuals and systems of racial and other oppression, and many at the margins daring to do things differently. With a defiantly hopeful faith in the newest generation of builders, Bailey notes that this is a time of disruption, uncovering, and transformation. Through the demographic shifts of the United States, the movements for racial justice that have grown in recent years as public killing of Black and Brown men and women continue, and the disparities revealed through the pandemic, young leaders are making change often outside of the traditional institutions (religious, cultural, social) that have led the way in the past. As we take this moment of fissure in social and global life, Bailey reminds us that “relationships move at the speed of trust and social change moves at the speed of relationships” (104).

Bailey calls us all to invest in relationships—a crucial component of social cohesion—with the humility, self-knowledge, and caring communities of accountability that enable people at the margins to not be risked, harmed, or exposed in the process. She asks three crucial questions about the bridging work required to address the fissures that threaten our communities and national health: What are you bridging toward? What are you bridging over? What is your bridge made of (is it strong enough to sustain through the painful injustices it seeks to bridge (p. 98)? Her deep care, nuanced articulation of the world, and vulnerability to articulating loss as well as a journey-in-progress, make Rev. Bailey an important guide as we seek to strengthen our civic health with equity and integrity.

The authors engaged in this piece share important insights both descriptive and prescriptive, drawing on history, theology, sociology and psychology, to provide a fairly comprehensive overview of the hurdles in our way as we seek to strengthen our religiously diverse democracy. The application of these insights relies on individuals committed to deploying them in local relationships, communities and institutions. It relies on leaders rebuilding broken systems with courage, connecting virtually and in person to others pioneering similar work, and telling the stories of this powerful and hopeful work. If we only know the destructive and critical failings of old institutions but don’t know the positive impact of creative endeavors that work, how can we build those new structures and practices? If we don’t know the destructive and critical failings of old institutions how can we build something better? We need both, and as Jennifer Bailey advised, any equitable and sustainable future will be built at the speed of relationships. 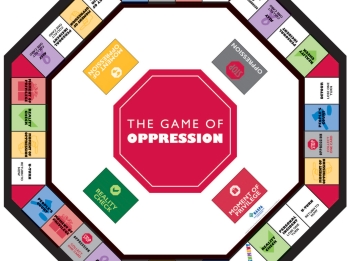 The Game of Oppression